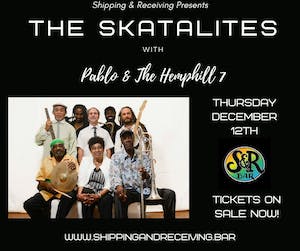 The Skatalites are a ska band from Jamaica. They played initially between 1963 and 1965, and recorded many of their best known songs in the period, including "Guns of Navarone." They also played on records by Prince Buster and backed many other Jamaican artists who recorded during that period, including Bob Marley & The Wailers, on their first single Simmer Down. They reformed in 1983 and have played together ever since.

Pablo and the Hemphill 7

Pablo and the Hemphill 7 formed when a group of Fort Worth musicians banded together and started playing a new fusion of rock-reggae. Their first show was November 26, 2001, at the Red Star Lounge, and they have been rocking the North Texas live music scene ever since.

Pablo always puts on an impressive live performance, and was voted Best Live Band in the Fort Worth Weekly Awards 09, 10, and 11. Frequent headliners at The Flying Saucer and Lola's 6th, count on Pablo to put on an energetic show that will move you onto the dance floor. The group has played festivals and clubs in many cities in the southern portion of the United States. Boasting a balance between skilled reggae covers and dynamic Pablo originals, their message of freedom, peace, and love rings true.