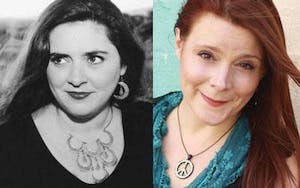 Carolyn Wonderland is a multi-award winning artist from Texas. She just won Best Female Vocalist (not bad for a guitar picker!) at the 2011/12 Austin Music Awards .Previously, she and her band were named Austin's Best Blues Band at the 2009 Austin Music Awards where Carolyn picked up the award for Best Female Vocalist, too! No stranger to awards, Carolyn has several from the Houston Music Awards (Best Guitarist, Musician of the Year, Release of the Year, Single of the Year, Best Female Vocalist, Best Blues Band, among others)! Carolyn, her band and friends were recently featured on PBS's Austin City Limits with Sharon Jones and the Dap Kings.Her 2015 Live CD, LIVE TEXAS TRIO is available everywhere. Her 2011 Bismeaux release, "Peace Meal" (recorded in Austin at Bismeaux and Woodstock, NY at Levon Helm's Studio) has been in the top ten iTunes Blues Chart, Top Twenty Americana Playlist and has found folks talking about Carolyn's music from House of Blues Radio's Elwood's BluesMobile to Don Imus, from Guitar Player Magazine to the Huffington Post. Carolyn is proud to announce her band's partnership with www.WhyHunger.org while on tour (and at home shows!) the band donates 10% of sales to this amazing organization. Please DO check them out! "Peace Meal" has been critically lauded and is the follow up to the 2008 CD, "Miss Understood" (produced by Asleep at the Wheel's Ray Benson) which has been on the charts and in rotation since it's release and has been featured on many "Best of" lists. She, Bobby Perkins, Kevin Lance, and Shelley Cox have toured most of the States, and Europe, and Japan ... perpetually on the road ... only landed in jail once (knock on wood) for peacefully protesting the war.

Lucky enough to jam with mentors and friends like

and recorded extensively with Jerry Lightfoot

At the 2007 inaugural Road To Austin festival,

she was accompanied by the amazing Bonnie Raitt,

and performed to much acclaim with Kris Kristofferson and Delbert McClinton, backed by Stephen Bruton's all-star band [incidentally, all filmed for a future realease!]

How lucky can one girl get?

Well, with a lot of hard work, just this lucky!

In her words, "I still get to play most every night,

so the Adventure continues; every musical interlude

is a new page, another chance to jump into the Ether."

Carolyn has eight releases of her own, and her music has been featured on tons of compilations from a live version of "Misunderstood" from 2008's Blues on the Green on KGSR's Broadcasts [Vol. 16], (benefiting the SIMS foundation) to XIT (Ten in Texas) where Carolyn sings Billy Joe Shaver's "Honky Tonk Heroes" with Asleep at the Wheel, to Palo Duro's Texas Unplugged [Vol. 2] where Cindy Cashdollar and Carolyn Wonderland play an acoustic instrumental they composed together, "Turtle Bayou Turnaround", to Ruf's Guitar Women anthology ... and lots more. It is also recommended you find "Texistentialism" from Jerry Lightfoot's Band of Wonder. (Carolyn was the singer in this band featuring Jerry, Carolyn and Vince Welnick) ... She and her band have backed up legends like Little Joe Washington, Lavelle White, and Pinetop Perkins.

In addition to Carolyn Wonderland's appearance on Austin City Limits, her music has been featured on prime-time network TV dramas such as NBC's "Homicide" and "Time of Your Life" on Fox... Notably, her biographical "Annie's Scarlet Letter" is the featured soundtrack for Houston NORML's PSA. Appearing in several recent award-winning films, she's a featured artist with an interview in "American Music: Off the Record", is a featured artist in "Texas Burning" and has songs and an appearance in the film "Sno-Cone."

She was once a panelist at the University of Texas LBJ Library's "Instruments of Freedom" Forum with Marcia Ball, Jerry Jeff Walker and Kinky Friedman...

Carolyn is also in a few other notable groups, including Sis DeVille, Austin's all-grrl southern-rock super-group (with Shelley King, Floramay Holliday, Lisa Pankratz, and Anne Marie Harrop)! ... When she's not driving around the country playing music, catch her celebrating Gospel Brunch at Maria's Taco X-Press (in Austin) with the Imperial Golden Crown Harmonizers (the first Sunday of most months) raising money for local charities. She's also a performing member [since its inception] of Austin's Instruments For Peace ... and has membership in the Loose Affiliation of Saints and Sinners (with Eldridge Goins, Guy Forsyth, Papa Mali, and several others); many of her songs are featured on

No images found!
Try some other hashtag or username